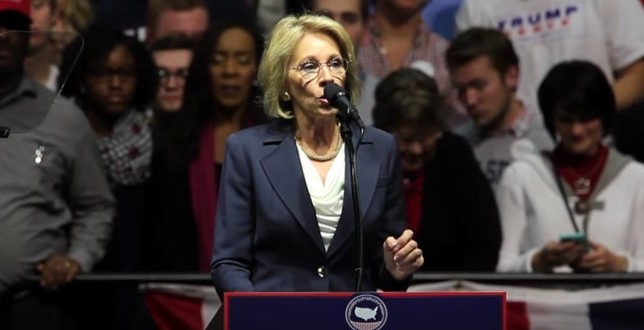 Lesbian, gay, bisexual, and transgender students contact Lambda Legal every day to seek help being safe at school.  We need a Secretary of Education who will make schools safe for all students, and who won’t tolerate bullying – by peers, parents, or school administrators. What we know so far about Betsy DeVos’s record concerns us. She has supported Focus on the Family, which opposes marriage equality, and her family foundation has funded a group that advances the dangerous practice of so-called ‘conversion therapy.’ Her advocacy for privatizing public education could eject students – LGBT or not – from the protection of federal laws.  A complete confirmation process for Betsy DeVos is necessary in order to fully investigate whether she supports equal rights for LGBT students.

DeVos’ work expanding charters in Michigan—a state that doesn’t have a whole lot of charter oversight—is almost certain to come up. But we don’t know much about her views on a range of other key issues, like accountability, teacher quality, education spending, and testing, not to mention civil rights issues. Those things could easily dominate the department’s work over DeVos’ first year in office, as the agency works to set the course for implementation of the Every Student Succeeds Act.

Expect serious questions from Democrats—possibly including Sen. Patty Murray, the top Democrat on the panel—on how DeVos views the role of the office for civil rights, in part because civil rights organizations have raised serious concerns about DeVos’ record on LGBTQ rights and more. Senators may even check to see if DeVos understands the office’s function, said Jamie Fasteau, a former aide to Murray and to former Rep. George Miller, D-Calif.

DeVos’ confirmation hearing begins at 5PM today and I’ll post a live-stream shortly before then.

Previous SAVE OUR HEALTHCARE: GOP Rep Booed Off Stage With Shouts Of “Liar” During MLK Day Speech [VIDEO]
Next BRAZIL: Woman Confesses To Stabbing Her Teenage Son To Death Because He Was Gay [VIDEO]