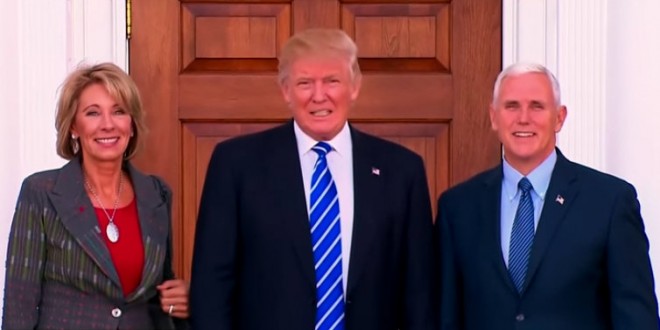 From the website of the Knights Of The Ku Klux Klan:

When Donald Trump named Betsy DeVos as his pick for heading the Department of Education opponents of school choice, school vouchers, charter school, and parental control warned that could mean the end of public education as we know it. Those who voted for Trump see her choice as his intention to eventually do just that – end Federal control for education.

In presenting DeVos, Trump said DeVos is “a brilliant and passionate education advocate.” Most heartening to conservatives is that he also said the mission he was assigning to her is to “break the bureaucracy that is holding our children back so that we can deliver world-class education and school choice to all families.”

DeVos has no background in public education but she is a lifelong advocate of parental choice. In her home state of Michigan, she has championed home schooling, charter schools, and a return of oversight of public schools to the states.

For decades, the Republican Party has resolutely stated its support for local control. Throughout his campaign, President-Elect Trump agreed, stating that “education has to be local.” In 2015, when asked if he would “cut departments,” Trump said, “I’m not cutting services, but I am cutting spending. But I may cut the Department of Education.”

Thirty years ago, Ronald Reagan called for the termination of the Department of Education. Reagan’s secretary of education, Terrell H. Bell, undermined Reagan’s plan to do away with the cabinet-level bureau. Thirty years later, it is hoped that Trump remembers that lesson from history.

NOTE: The Klan sources the above article to something called the American Liberty Report. Read it in full here. (Tipped by JMG reader Michael) Previous Anti-LGBT Catholic Hate Group: We Love That Liberals Hate Us So You Should Send Us “Sacrificial Donations”
Next Franklin Graham: My Followers Prayed Trump Into Office By Begging Forgiveness For America’s Sins