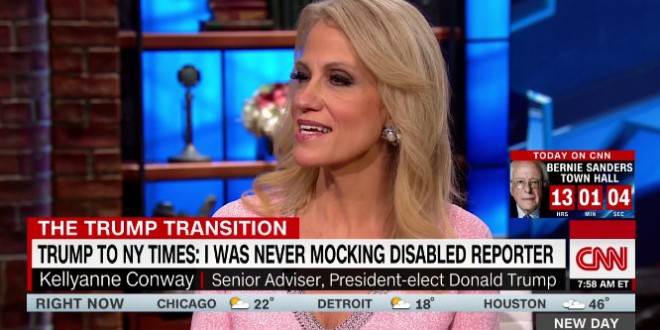 Kellyanne Conway: Why Do You Listen To What Donald Trump Says Instead Of What’s In His Heart? [VIDEO]

Donald Trump adviser Kellyanne Conway faced a grueling interview today where she was confronted by one of the mogul’s most enduring and controversial political moments. “That is not what he did,” Conway said when asked if what Trump did was wrong. Cuomo brought up how Trump can deny mocking Kovaleski’s arthrogryposis as much as he wants, and yet, there’s a great deal of evidence to show that that is what he did. “Why don’t you believe him? Why isn’t it taken at face value?” Conway said in exasperation. “You can’t give him the benefit of the doubt on this and he’s telling you what was in his heart? You want to go with what’s come out of his mouth rather than what’s in his heart.”

“Why can’t you give him the benefit of the doubt?” Kellyanne Conway says Trump wasn’t mocking reporter’s disability. https://t.co/3LAWwTIME4