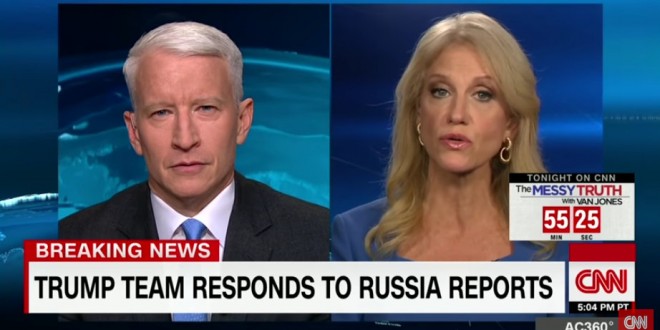 Anderson was NOT having it. Mediaite reports:

Kellyanne Conway and Anderson Cooper got into a massive heated back-and-forth tonight [last night] over CNN’s report last night on Trump being briefed about supposed “compromising” information against him.

Cooper expressed his frustration that Sean Spicer appeared to be conflating CNN’s report with BuzzFeed’s, which included a dossier on that alleged Russian disinformation, and he confronted Conway about that. Conway repeatedly insisted to Cooper that CNN’s “screaming headline” was wrong and that they linked to the BuzzFeed report online.

Cooper seemed utterly bewildered at Conway scolding CNN for its report, and when she said “I know CNN is feeling the heat today,” Cooper shot back, “I think you guys are feeling the heat.”

Cooper defended CNN’s reporting and asked Conway how she can dismiss it as inaccurate when she doesn’t know for certain that it’s false. He said, “CNN is not BuzzFeed, I just wish you guys would acknowledge [it].”

At one point Conway told him that “CNN and BuzzFeed have a lot in common” and criticized both for not seeing Trump’s win coming. Cooper shot back, “You can’t stick to what we’re talking about now.”

The bickering only got worse from there. Watch below.

Fact @KellyannePolls you said repeatedly on our air we LINKED to the buzzfeed story, which we did not, not that a story mentioned its name https://t.co/Q0JrqsiUwN

Previous Samantha Bee Goes To Town On #PissGate [VIDEO]
Next Peter Thiel: No Corruption Can Be A Bad Thing