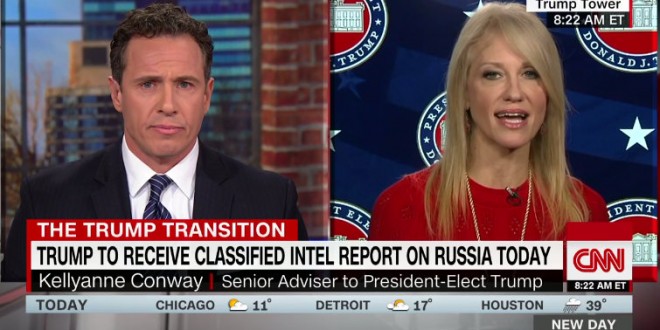 Conway Blows Up At CNN’s Chris Cuomo: Trump Is Not Protecting Russia! Don’t You Say That Again! [VIDEO]

Kellyanne Conway this morning delivered yet another of her now-classic and maddening dodge-and-weave interviews, talking in circles and evading questions. Mediaite recaps one of the bits:

“I’ll ask you a third time!” Cuomo said at one point about the October joint report from the Homeland Security Department and the Office of the Director of National Intelligence: did the intelligence community announce its findings of Russian involvement, yes or no?

What transpired was an (at times) infuriating battle between a fast-talking New Yorker and an equally abrasively stubborn and witty woman from New Jersey, both also aided by legal backgrounds. “Chris, I see you’re very passionate about this,” Conway said.

“Sure I am. Russia trying to hack during our election, being ignored by our President-elect? That’s troubling,” Cuomo shot back. Remarkably, Conway responded. “Right. No it’s not.” She furthered at one point, “You just want to argue with me.”

“You’re ducking the obvious,” he said, “and I don’t know why.” At one point, when the New Day anchor alleged that Trump was “sheltering Russia,” Conway defiantly shot back, “Don’t you say that again.”

Cuomo couldn’t even get Conway to call out Russia by name.