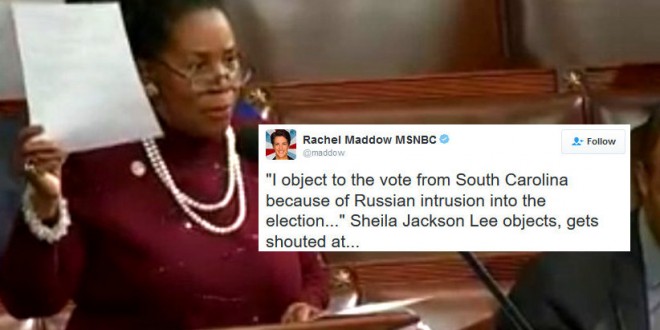 All they need was ONE Senator to force a debate, but it was a lost cause from the start. Politico reports:

A challenge by several House Democrats to Donald Trump’s election on Friday collapsed when they failed to convince a single Democratic senator to join their protest. The short-lived, doomed-from-the-start effort — spearheaded by Rep. Sheila Jackson Lee of Texas and Barbara Lee of California — came during a joint meeting of the House and Senate to certify Trump’s Electoral College victory.

Without sufficient support to challenge Trump’s victory, the Republican-led Congress moved ahead with an easy confirmation of Trump’s presidency. The only remaining step is for him to take the oath of office on Jan. 20.

“It is over,” said Vice President Joe Biden, presiding over the meeting, said after three Democratic House members lodged objections but failed to secure required support from any senator. His comment drew a standing ovation and cheers from the assembled Republicans in the room. The joint session of Congress is a legally required — and typically ceremonial — event to ratify the results of the presidential election. But members are permitted to challenge the validity of electoral votes, and for just the fourth time since the 1877, they did so.

Though any single member may lodge an objection, only those supported by both a House member and senator are eligible for debate. Had the effort by House Democrats gained support of a single senator, it would have delayed the confirmation of Trump’s victory by hours, forcing the Senate to retreat to its chamber and debate the merits of each challenged electoral vote.

Yesterday a bipartisan group reported that at least 50 Trump electors had been seated illegally under various state rules.