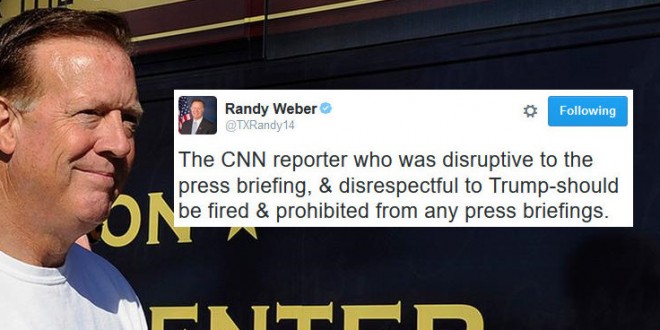 A day after Donald Trump shouted down CNN reporter Jim Acosta at his first “press conference” since July and accused his network of providing “fake news,” a Republican Congressman is demanding that Acosta be fired.

Two years ago to the day, Rep. Randy Weber (R-TX) made national news for a tweet comparing the president of the United States — unfavorably — to Hitler. He later apologized for his observation that “Even Adolph [sic] Hitler thought it more important than Obama to get to Paris. (For all the wrong reasons.) Obama couldn’t do it for right reasons,” and deleted the tweet.

He never removed a January 2014 tweet in which he called Obama “Kommandant-In-Chef”… the Socialistic dictator,” nor others suggesting POTUS stood for “Poor Obama Trashed U.S.” But now, apparently, Weber has decided that being rude to the president is an offense worthy of firing.

You may recall that Weber also introduced a US House bill that would have banned states from recognizing out-of-state marriages. Weber is a regular guest on Tony Perkins’ radio show and occasionally guest hosts.