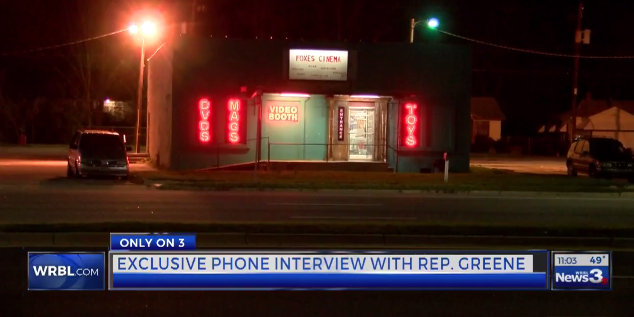 A Republican lawmaker has made the national news after changing his story about where he was during a mugging in which he was shot in the leg. The New York Daily News reports:

A Georgia state lawmaker carrying thousands of dollars in storm relief funds says he was shot in the leg during a robbery behind an adult cinema. Republican Gerald Greene of Cuthbert was stopping for gas at a convenience store in Columbus, Ga., when he was shot in the leg, a spokesman for Georgia’s House Speaker originally said.

Surveillance footage shows the 69-year-old limping into a convenience store, though he later told WRBL that he was actually parked behind adult establishment Foxes Cinema when he was wounded. Greene told the station that he has previously visited the cinema, which Cruisinggays.com says is popular with men ages 18 to 40 and features booths where patrons can interact with each other.

He said that he did not go there on Thursday, and was visiting the liquor store two stores away from where he was parked. Witnesses told WRBL that Greene then drove to the liquor store before getting out of his car and the shopkeepers called for help.

A Columbus Police Department report seen by the Daily News shows Greene reported his iPhone stolen. Greene told WRBL that the would-be robber, who allegedly pointed a gun at his chest and demanded money, did not successfully take the donation to the American Red Cross that he was holding.

The liquor store’s owner praised Greene as an excellent customer who visits several times a week to buy “good stuff.”