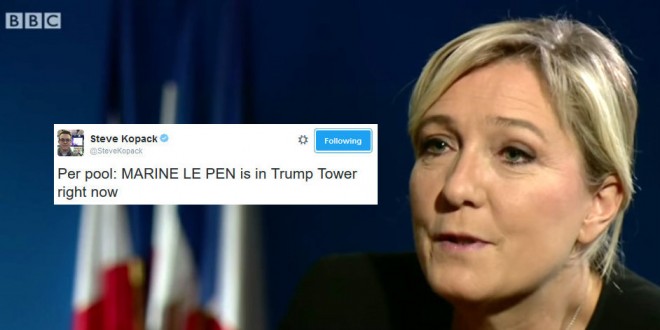 This is the new normal. Everything is fine. Bloomberg reports:

French National Front leader Marine Le Pen is in New York on an unannounced visit less than four months before France’s presidential election, according to a senior campaign official. Le Pen, who leads in the latest opinion poll for the presidency, is making a private visit to New York, her campaign chief of staff, David Rachline, said in a text-message exchange. Donald Trump had no plans to meet with Le Pen, according to an aide to the president-elect, who asked not to be identified without authorization to speak publicly. “It’s not on her public agenda,” Rachline said, when asked if she planned a meeting with Trump or officials close to him. “We don’t communicate about private visits.”

This is obviously Bannon’s doing.