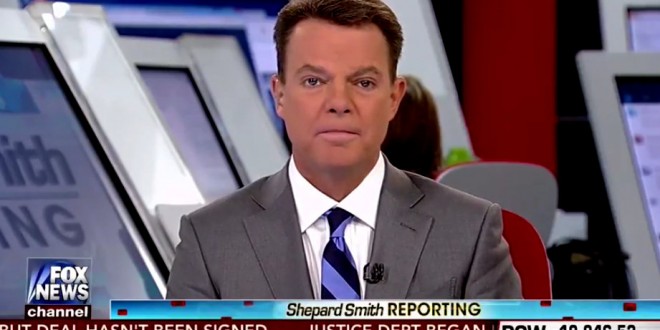 Fox News Host Shep Smith Defends CNN: No Journalist Should Ever Be Belittled By The President [VIDEO]

Smith said, on behalf of Fox News, that CNN followed “journalistic standards” in the report it published ― which was “distinctly different” from BuzzFeed’s. CNN’s story, unlike Buzzfeed’s, did not include the full, unedited dossier of unverified allegations made about Trump’s ties to Russia. Smith added that no journalists should be treated in the way Trump treated CNN’s Jim Acosta. Acosta had said Wednesday that Trump’s press secretary threatened to have him thrown out of the press conference if he questioned the president-elect.

Here’s the key quote from the clip below:

“President-elect Trump today told CNN’s Jim Acosta that his organization amounts to fake news. CNN’s exclusive reporting on the Russian matter was separate and distinctly different from the document dump executed by an online news property. Though we at FOX News cannot confirm CNN’s report, it is our observation that its correspondents followed journalistic standards and that neither they nor any other journalists should be subjected to belittling and delegitimizing by the President-elect of the United States.”