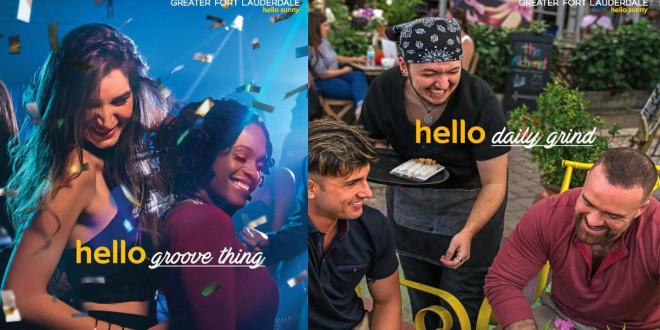 The Greater Fort Lauderdale Convention & Visitors Bureau will launch a new global marketing and advertising campaign on January 9th featuring three transgender models, and will become the world’s first destination to use transgender models in mainstream destination advertising. Greater Fort Lauderdale’s campaign, which also features straight, gay and lesbian models, follows the destination’s long and storied history in LGBTQ marketing and is directed at a largely millennial and younger mind-set audience to showcase the destination’s image as an authentic, diverse and inclusive brand.

The new advertisements, covering a full-spectrum of destination lifestyle experiences, will appear in print, digital, television, radio and social media throughout South Florida, New York, Boston, Chicago, and in national outlets such as New York Times’ T Magazine, USA Today Travel Magazine, Passport, ManAboutWorld as well as on Spotify, Pandora, Hulu and in the destination’s collateral, website and e-blasts. The campaign had an early premiere in New York City on December 31, 2016 and January 1, 2017 with a Times Square billboard video featuring Isabella Santiago, a Venezuelan model and 2014 Miss World Transgender. Viewed by millions, the video formed the backdrop to New York City’s famous New Year’s Eve ball drop. Campaign imagery was shot throughout Greater Fort Lauderdale/Broward County, capturing a “beach and beyond” showcase of some of the destination’s most popular areas, including Fort Lauderdale Beach, Hallandale Beach, Deerfield Beach and Wilton Manors.

“Using Trans models in our mainstream campaign says who we are as a destination; cosmopolitan, edgy, diverse, inclusive, authentic and accepting,” said Richard Gray, Managing Director LGBTQ Market, Greater Fort Lauderdale Convention & Visitors Bureau. “We are the only destination in the world that is using Trans people in mainstream marketing initiatives. That is a huge statement in itself highlighting this destination’s commitment to diversity, inclusion and equality. We want all travelers that visit our destination to be free to be themselves, to be free to be accepted, and most of all to be safe and respected.”

Previous REPORT: 50+ Trump Electors Were Seated Illegally
Next Pharrell Talks About Kim Burrell To Ellen: There’s No Room For Any Kind Of Prejudice In 2017 [VIDEO]