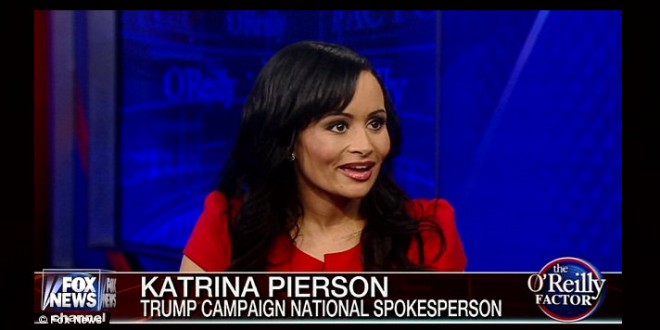 Katrina Pierson’s combative, made-for-TV personality made her a key surrogate for Donald Trump on the campaign trail, but she won’t be a part of Trump’s White House. Instead, the North Texas Tea Party advocate will run communications for America First Policies, a pro-Trump non-profit that will “support key initiatives and policies of the White House.” The group’s launch was made official on Monday.

The non-profit, which is modeled after the pro-Obama group Organizing for Action, aims to raise millions to assist in Trump’s reelection — along with taking on the media. “The organization will promote policy, support leaders, coalitions, and other organizations who back America First policies, and communicate directly to citizens – directly challenging the agenda of the liberal and biased media,” America First said in a press release.

Pierson gained infamy during the campaign for blaming Barack Obama for the U.S. invasion of Afghanistan and the death of Capt. Humayun Khan in 2004 during the Iraq War. During an appearance on Fox News’ “O’Reilly Factor” in 2015, Pierson asked, “What good does it do to have a good nuclear triad if you’re afraid to use it?”