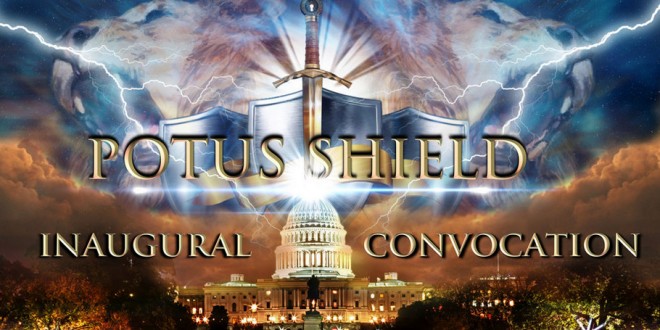 From the about page of POTUS Shield:

The prophets spoke, the leaders stood up, and the people heard … We repented, we prayed, we declared… and the Lord moved! On a single day in November He shifted the future of this nation and also inspired the Body of Christ with renewed hope! On January 20, 2017 our nation celebrates the inauguration of Donald Trump as the 45th President of the United States.

Now God is speaking again: “Surely the Lord does nothing unless he reveals His secret to His servants the prophets.” (AMOS 3:7).

YOU ARE CORDIALLY INVITED TO PARTICIPATE IN THE INAUGURAL CONVOCATION OF THE POTUS SHIELD.

It is our time to storm heaven for a New America, revival in our land, and to bring our country back to God! We are the redeemed of the Lord who are coming to raise up a shield of faith and the sword of the Spirit.

The Lord has summoned a prolific council of prelates and prophets to convene in Washington, D.C. one week prior to the inauguration of Donald Trump as the 45th President of the United States of America. These servants of God are especially gifted to discern the times and to prophesy the Word of The Lord, even so as we seek to prepare the way for transformation, reformation, and revival in our nation.

We are called to gather in the nation’s capital and to raise up a shield of prayer and prophetic understanding, grounded in the firm foundation of the immutable Word of God, and inspired with fresh revelation by the Spirit of The Lord. These proven leaders are convening to release the Word of the Lord, and to lead this anointed assembly in powerful prayers, intercession, declarations and decrees over the White House, the Supreme Court, and Capitol Hill.

Now that is a caravan of cuckoo crazy.