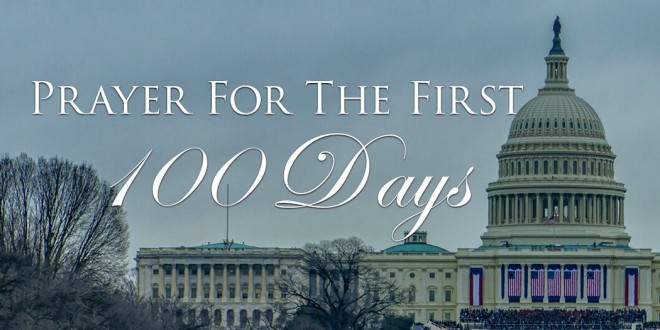 This is separate from the POTUS Shield and the seven days of circling around the White House. From the just-for-Trump website Pray As One:

As Christians, we believe in the power of intercessory prayer. As the late scholar of revival James Edwin Orr once said, “No great spiritual awakening has begun anywhere in the world apart from united prayer.” Across the nation, leaders are hearing the Lord say that the U.S. is going to experience a great awakening.

Prompted by this message, a coalition of influential evangelical and charismatic/Pentecostal leaders met together in a meeting hosted by Dick Eastman at the international headquarters of Every Home for Christ.

Out of this has emerged a broad coalition of ministries called, As One. The vision is: uniting as one in Christ Jesus, appealing to heaven to change the spiritual climate of our nation. The basic strategy revolves around a period of prayer-walking, fasting, and corporate prayer events. We invite all who are like-minded to join us in this pursuit of seeing a great awakening.

God is at work resetting this nation on a course that is pleasing to Him. The individuals that will make up the Cabinet will literally be working with President Trump to form the nation’s future. If their character is off, the nation will be off. If they are men and women with knowledge and integrity, who will work together with the other departments of our government, we will move forward rapidly. The Senate is critical to these confirmations and this is where the battle will be. Pray for each one in accordance with Exodus 18:21.