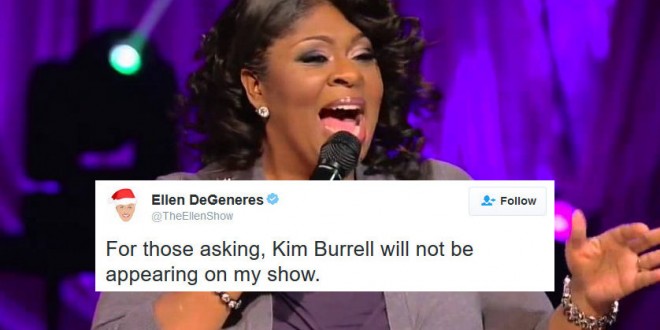 Ellen DeGeneres announced via Twitter that she has uninvited gospel singer Kim Burrell from performing on her daytime talk show after video began circulating online of an anti-gay sermon Burrell delivered at a Houston TX church. Burrell had been scheduled to sing the soundtrack song “I See A Victory” with Pharrell Williams, on DeGeneres show this Thursday; Williams instead will perform solo.

In a recent sermon at Liberty Fellowship Church International, Burrell, who is a pastor there, said that “perverted homosexual spirit, and the spirit of delusion and confusion, it has deceived many men and women.” Video of the sermon also triggered quick response from Williams, who said, via Instagram: “I condemn hate speech of any kind. There is no room in this world for any kind of prejudice. My greatest hope is for inclusion and love for all humanity in 2017 and beyond.”

The song Burrell was to perform is from the movie Hidden Figures and two of its stars, Janelle Monae and Octavia Spencer, have also denounced Burrell.

For those asking, Kim Burrell will not be appearing on my show.

Previous REPORT: Clintons To Attend Trump’s Inauguration
Next ALL IN THE FAMILY: Kellyanne Conway’s Husband Interviews With Jeff Sessions For Solicitor General Post