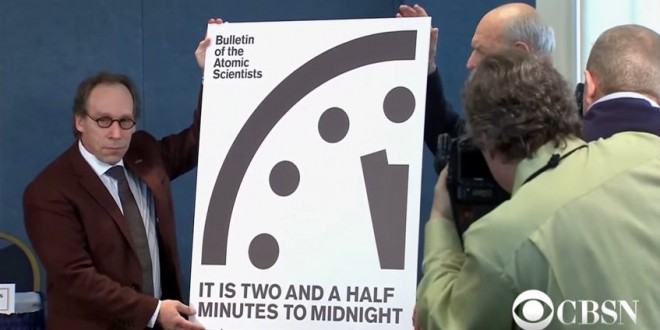 The minute hand on the Doomsday Clock ticked closer to midnight Thursday, as the Bulletin of the Atomic Scientists said it’s seeing an increase in dangers to humanity, from climate change to nuclear warfare. The group took the “unprecedented” step of moving the clock 30 seconds closer to midnight, to leave it at 2 1/2 minutes away.

The setting is the closest the clock has come to midnight since 1953, when scientists moved it to two minutes from midnight after seeing both the U.S. and the Soviet Union test hydrogen bombs. It remained at that mark until 1960. “Make no mistake, this has been a difficult year,” Rachel Bronson, executive director and publisher of the Bulletin of the Atomic Scientists, said as the new setting was announced Thursday.

Explaining its move, the Bulletin’s Science and Security Board said: “Over the course of 2016, the global security landscape darkened as the international community failed to come effectively to grips with humanity’s most pressing existential threats, nuclear weapons and climate change. This already-threatening world situation was the backdrop for a rise in strident nationalism worldwide in 2016, including in a U.S. presidential campaign during which the eventual victor, Donald Trump, made disturbing comments about the use and proliferation of nuclear weapons and expressed disbelief in the overwhelming scientific consensus on climate change.”

The board criticized President Trump further, saying that “even though he has just now taken office, the president’s intemperate statements, lack of openness to expert advice, and questionable cabinet nominations have already made a bad international security situation worse.”