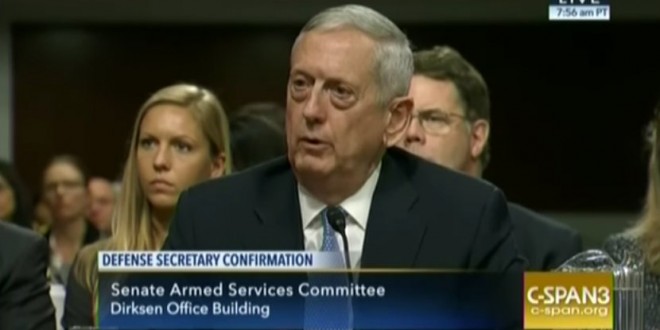 At his confirmation hearing on Thursday, Retired General James Mattis — President-elect Donald Trump’s pick to be secretary of defense — refused to say whether he believes women and LGBT people should be able to serve in the military.

Sen. Kirsten Gillibrand (D-NY) noted during questioning that Mattis had previously said allowing women and men to serve together was like mixing different types of arrows, and asked whether he still believes that. Mattis responded that he did not plan to make any changes unless someone brings a problem to his attention.

“I’m looking for military readiness,” he said, adding that he has “no plan to oppose women.” Noting additional comments he had made about gay and lesbians in the military, Gillibrand then asked, “ Do you believe that openly serving homosexuals, along with women in combat units, is undermining our force?”

As you’ll see in the clip, Mattis dodged the question again and again. Hit the link for more. Kudos to my Senator for pressing the issue.