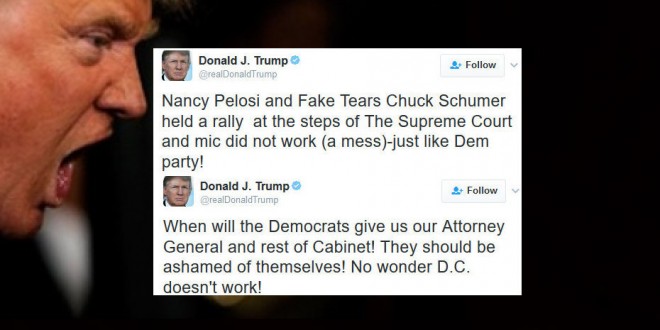 A night after firing his acting attorney general for refusing to defend his new immigration order, President Trump mocked his Democratic congressional critics Tuesday and demanded that the Senate confirm his pick to lead the Department of Justice, Jeff Sessions.

The tweets came a morning after Trump fired acting Attorney General Sally Q. Yates after she said she refuse to defend Trump’s temporary immigration ban from seven Muslim countries against its many legal challenges. Trump appointed a U.S. attorney from Virginia to run the department until the Senate votes on whether to confirm Sessions, something that is expected this week.

Nancy Pelosi and Fake Tears Chuck Schumer held a rally at the steps of The Supreme Court and mic did not work (a mess)-just like Dem party!

When will the Democrats give us our Attorney General and rest of Cabinet! They should be ashamed of themselves! No wonder D.C. doesn't work!