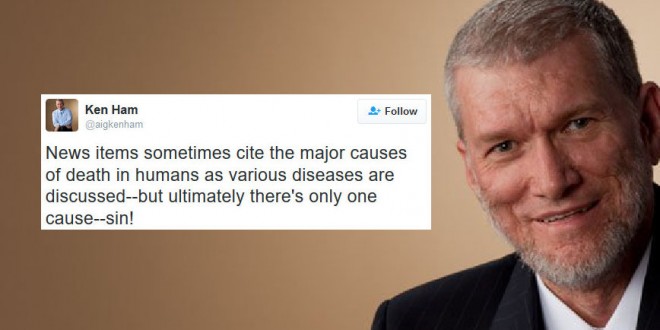 Creationist Ken Ham: The Only Cause Of Death Is Sin

Creationist nutjob Ken Ham, founder of the Creation Museum and the Ark Encounter, took to Twitter this morning to dispute a Fox News report on “rising death rates in the USA.” According to Ham, the death rate has been unchanged for all 6000 years of the Earth’s existence and every single person who ever lived was murdered by God for sinning. Not only that, a visit to Ham’s website shows that even animals die because of human sin. For real.

Neil Cavuto, Fox News talked about the rising death rates for people in USA-I have news for him: the death rate has been 100% for 6,000 yrs pic.twitter.com/OvU2N5ISE8

News items sometimes cite the major causes of death in humans as various diseases are discussed–but ultimately there's only one cause–sin! pic.twitter.com/jUHTBtfMQn