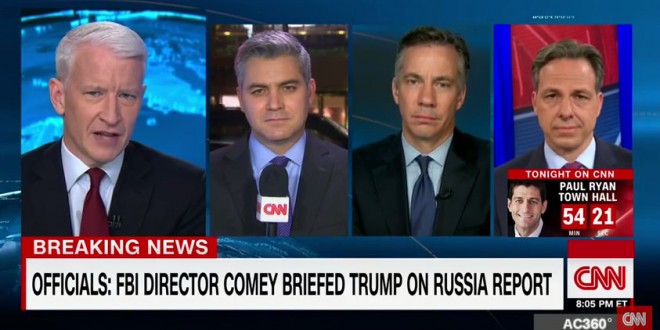 It was SO enjoyable to watch this last night. Via Mediaite:

If you were wondering how CNN would proceed after being trashed by President-elect Donald Trump and his advisors this week, the first 15 minutes of AC360 should make it very clear. The quartet of Anderson Cooper, Jake Tapper, Jim Sciutto, and Jim Acosta (the reporter who Trump fought with) went all-in criticizing the Trump team’s reactions to their network’s initial reporting about the 2-page synopsis the president-elect was briefed on.

Kellyanne Conway in particular disputed that––in part by citing reports from elsewhere––but with CNN supplementing its reporting tonight, Cooper called out Conway for “misleading on two points” in their contentious back-and-forth last night. Cooper again made it clear that CNN’s reporting was separate and distinct from BuzzFeed’s (and they did not link directly to BuzzFeed’s report with that dossier full of unverified allegations, even though Conway told Cooper they did).