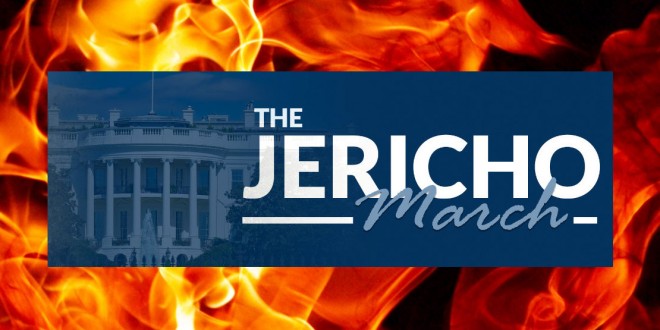 A nutjob Christian group calling themselves Intercessors For America has quite the bizarre event planned. Helping them out will be the End-Time Handmaidens. I’m not kidding. Via press release:

For too long, our adversary has built mighty walls around our elected officials in Washington, D.C. So, starting on Jan. 13, 2017, we will begin a seven-day Jericho march around the White House and Capitol, culminating with a mighty “shout” by believers across the nation as President-elect Donald Trump takes the oath of office and is installed as our new president of the United States of America.

Many believers will be in D.C. marching on the same days, along with multitudes of others joining on Jan. 20 as they watch the inauguration ceremonies. Unity is the key. Please use the prescribed battle strategy by declaring the coming victory of the Lord using the Scriptures included in this resource and by shouting to the Lord as the applause rises when President Trump utters the last words of his oath of office.

1. Jan. 14-19 — Teams of intercessors will be prayer walking (marching) around the U.S. Capitol and the White House complex, declaring the coming presence of our Lord and destruction of the walls of protection around those oppose Him. Those not able to be in D.C. during these times may do the same during their prayer times.

2. Jan. 20 — As President Trump finishes his oath of office, at the moment of the power transition, all intercessors are instructed to shout to the Lord with faith and expectation that the spiritual walls will be destroyed at that moment. For those not in D.C., please do this wherever you are, and consider joining thousands across this nation by dialing 712-432-0075, then enter the code 1412452#. The call will start at the beginning of the Inauguration ceremony.

On the board of directors for Intercessors For America is notorious anti-LGBT crackpot Larry Tomczak, perhaps best known for his very public battle with Ellen DeGeneres, whom he claims is using Taylor Swift to lure young girls into lesbianism. In 2013, Tomczak was accused of physically abusing a woman over a period of 25 years. Perhaps not incidentally, Tomczak is the author of a book that advocates beating your children.

Previous Feds Indict Six Volkswagen Executives In Emissions Fraud Scandal As Company Agrees To Pay $4.3B Fine
Next Fox News Host Shep Smith Defends CNN: No Journalist Should Ever Be Belittled By The President [VIDEO]