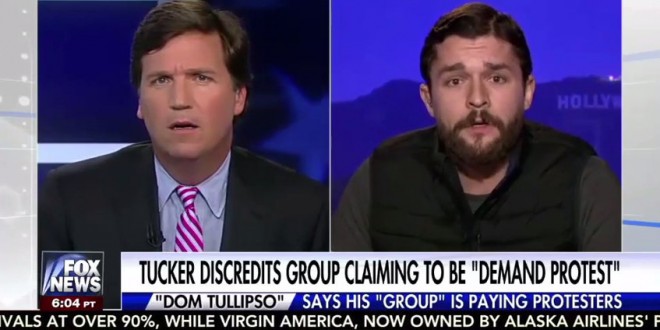 This morning I reported that numerous right wing sites are flipping out over a mysterious group offering to pay leftists $50 an hour (plus medical benefits!) to disrupt Donald Trump’s inauguration. And exactly as I said, the group has turned out to be completely fake. What I did not, however, predict is that they would be exposed by Fox News. Watch below as Tucker Carson eviscerates the fake group’s bumbling, stammering, fake spokesman, who as you’ll see, was even using a fake name. For your pleasure, I’ve screencapped just a few of the headlines found today across Teabagistan. At this writing, only vile homocon Milo Whathisopoulos has deleted his post. Homocon Jim Hoft, AKA “the stupidest man on the internet,” has not.