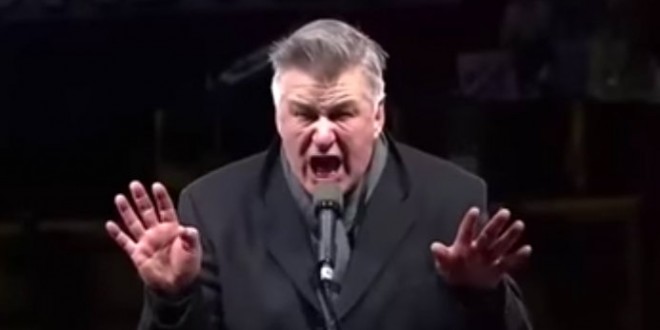 Celebrities who oppose Donald Trump are not sitting out this Inauguration. The night before Trump is to be sworn in as the 45th president of the United States, A-listers came out in droves for the “We Stand United” rally in New York City. Stars including Alec Baldwin, Julianne Moore, Cher, Mark Ruffalo, Shailene Woodley, Marissa Tomei, Robert De Niro, Sally Field, Rosie Perez, Michael Moore, Cynthia Nixon, and NYC Mayor Bill de Blasio all spoke and sang at the rally, which was held outside of Trump Tower.

Baldwin, who has been slammed by the president-elect for his portrayal on Saturday Night Live, got up to address the crowd in character, and didn’t hold back. “I just want to say I’ve been standing out here in the freezing cold for a long time,” Baldwin complained in his Trump voice. “I have to go to the bathroom, I have to pee. But I’m holding it in. I’m not going to pee. I’m going to a function at the Russian consulate tonight. I’m going to hold it in until I get there. And then when I get to the Russian consulate, I’m going to have a really, really long pee.”