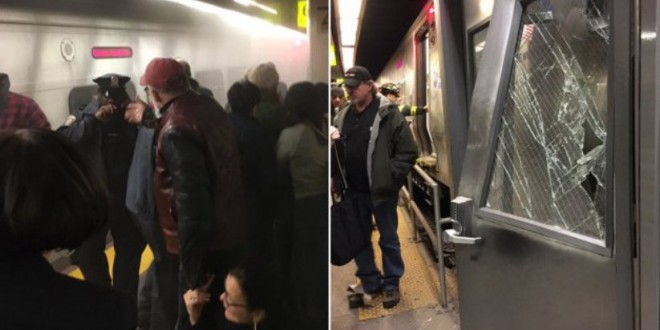 A LIRR train derailed in Brooklyn on Wednesday, with initial reports suggesting 20 people were being treated for injuries. The derailment happened at Atlantic Terminal. Pictures on social media showed the derailment took place on track 6, and that the train was tipped slightly at an angle. The platform also appeared to be smoky. As of 8:50 a.m. the MTA did not have any information on its website. “I don’t know, all I remember is being on the floor,” one visibly shaken woman who had been on the train told NBC 4 New York between tears. Several people complained of neck and back injuries, though overall most wounds appeared minor. Passengers described the train pulling into the station, followed by a crash and a loud boom, after which the train’s doors opened.

My #LIRR train crashed at #AtlanticTerminal in #Brooklyn. Crazy. Seems only a few people are lightly injured. pic.twitter.com/oXHvy2yxDL

Anticipate possible delays into and out of Atlantic Terminal this morning due to an incident at the terminal.