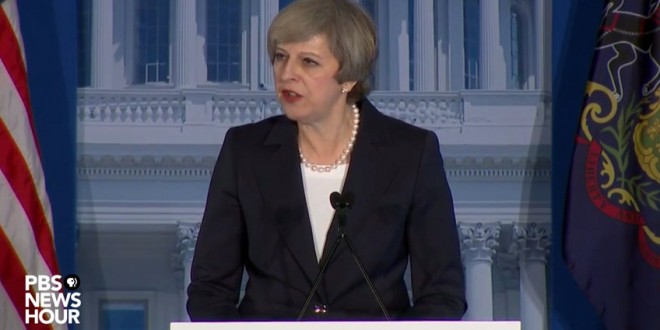 Theresa May has said she believed she could a forge a strong personal relationship with Donald Trump, arguing that “sometimes, opposites attract”, as she set out how post-Brexit Britain could work with his country to shape the world.

On the eve of a much-anticipated visit to the Oval Office, the prime minister used a speech to Republican leaders in Philadelphia to pledge that the two countries “have a joint responsibility to lead”, but not as they did before.

May argued that a new “special relationship” would be nothing like the one between Tony Blair and George W Bush, which saw the pair collaborate in invading Iraq and Afghanistan. “The days of Britain and America intervening in sovereign countries in an attempt to remake the world in our own image are decisively over”.

Despite the growing controversy in the UK and worldwide about Trump’s remarks on the use of torture, as well as a series of other policies including the border wall with Mexico, May said she was determined to “deepen” links. She added: “It is in our interests – those of Britain and America together – to stand strong together to defend our values, our interests and the very ideas in which we believe.”

Speaking to journalists on the plane to Philadelphia, the prime minister was asked about the contrast in temperaments between the brash billionaire and a vicar’s daughter, when she meets Trump in the White House on Friday. “Haven’t you ever noticed, sometimes opposites attract?” she replied.

Previous Steve Bannon: “The Media Should Keep Its Mouth Shut”
Next Pastor Rick Wiles: Thanks To Trump, God’s Grace Is “Oozing Out Of Heaven” And I’m Rolling In It [AUDIO]