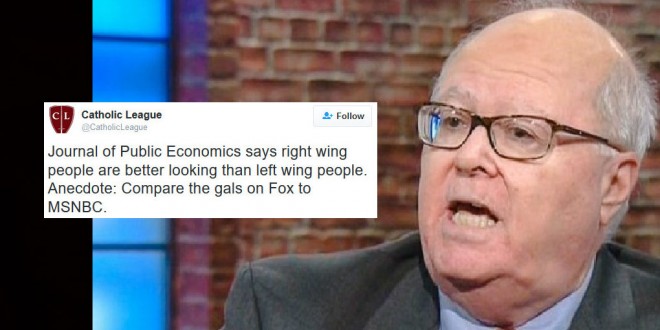 Catholic League blowhard and well-known supermodel Bill Donohue today used a just-issued study to declare that the female reporters at MSNBC are unattractive. It’s what Jesus would want. The reason that the study comes to its conclusion is rather interesting. The Washington Post reports:

Research has found that being attractive influences many things in a person’s life — their salary, their popularity and grades in school, even the prison sentences they receive. So why not their politics?

A recently published study in the Journal of Public Economics concludes that the attractiveness of a candidate does correlate with their politics. They find that politicians on the right are more good looking in Europe, the United States and Australia.

The study shows correlation, not causation, but the researchers float a simple economic explanation for why this might happen. Numerous studies have shown that good-looking people are likely to earn more, and that people who earn more are typically more opposed to redistributive policies, like the progressive taxes and welfare programs favored by the left.

The researchers also offer a more general psychological explanation for the trend: That good-looking people are often treated better than others, and thus see the world as a more just place. Past studies have found that the more attractive people believe themselves to be, the lower their preference for egalitarianism, a value typically associated with the political left.

The study is also being promoted today by Matt Drudge, another wingnut top model.