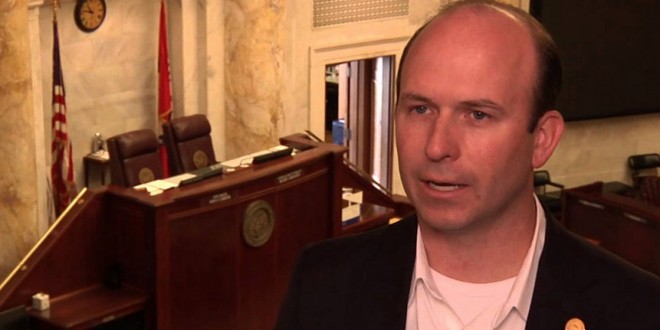 An Arkansas Republican lawmaker has pleaded guilty in federal court to charges that he personally profited from an elaborate bribery and kickback scheme involving a northwest Arkansas evangelical Christian college.

Hemant Mehta at The Friendly Atheist pointed to the rapidly mushrooming scandal which the Arkansas Times said could land state Rep. Michah Neal behind bars for up to 20 years and cost him a fine of up to $250,000.

According to a Justice Department news release, “As part of his guilty plea, Neal admitted that, between January 2013 and January 2015, while serving in the Arkansas House of Representatives, he conspired with an Arkansas state senator to use their official positions to appropriate government money known as General Improvement Funds (GIF) to a pair of non-profit entities in exchange for bribes.”

The release continued, “Of the $600,000, Neal personally authorized and directed a total of $175,000 to the entities. In return for his official actions, Neal received approximately $38,000 in bribes from officials at those non-profit entities.”

Ecclesia officials deny all knowledge of any financial improprieties. School president Dr. Oren Paris III published an open letter on Facebook professing his and the college’s innocence of any wrongdoing.

So this is an actual thing at Ecclesia College:

Ecclesia College is excited to announce the launch of the new David Barton School of Political Science. The school’s initial degree offering will be a Bachelor of Arts in Political Science, beginning in the Fall of 2016, and available either on campus or online. Our degree in Political Science prepares students for employment in politics, public administration, and public policy – careers that can allow you to influence the course of history. Build a foundation of knowledge in American politics while learning how to integrate your Christian faith into the public arena from faculty currently practicing in the profession. You will examine, analyze, and debate relevant issues in current affairs and policy-making through the lens of a biblical worldview. Complete your degree by applying your newly-developed understanding and skills with an internship in local or state government to gain hands-on exposure to policy-making and cultural development. Come learn to make history.