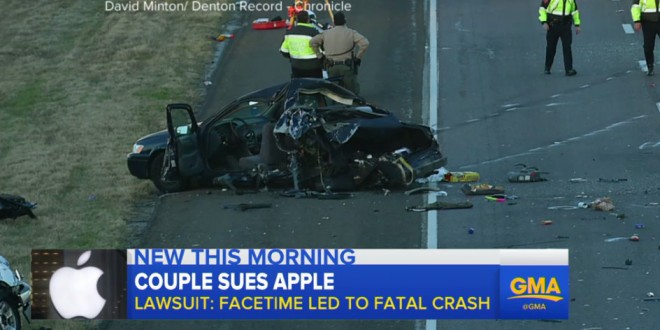 A Texas couple is suing Apple, claiming that its FaceTime app distracted a driver who rammed into the couple’s car, killing their 5-year-old daughter. Parents James and Bethany Modisette are suing Apple for damages on the basis that the electronics giant failed to install and implement a “safer, alternative design” for FaceTime that would have helped to prevent a driver from using the app while traveling at highway speed, court documents show.

The lawsuit filed Dec. 23 in California Superior Court in Santa Clara County also claims that Apple failed “to warn users that the product was likely to be dangerous when used or misused” or to instruct on its safe usage. The fatal accident occurred Christmas Eve in 2014 near Dallas, when, according to the lawsuit, the Modisette family was driving in a Toyota Camry, with daughter Moriah, 5, in a booster seat in the left rear passenger seat and her sister, Isabella, next to her in the right rear seat.

The suit contends that Apple has the ability to disable the use of FaceTime while traveling at “highway speeds” but has failed to do so.

Previous BRITAIN: Hannity To Interview Julian Assange Inside Ecuadorian Embassy For Congratulatory Fox Special
Next Pope Commands Bishops To Have “Zero Tolerance” For Child Sex Abuse (That They’ve Been Covering Up)