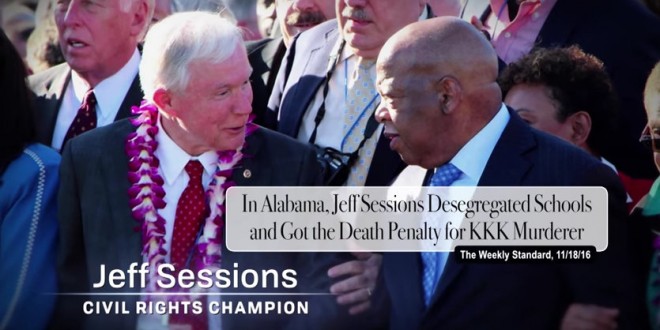 Sessions has been a lifelong opponent of civil rights. He was rejected for a federal judgeship in 1986 because of a record of insensitive racial remarks and a case in which he had targeted civil rights workers registering African Americans to vote. Since then, as attorney general of Alabama and as a U.S. senator, has stood in the way of progress for women, people of color, immigrants and LGBT Americans, among others.

The ad, paid for by the 45Committee, goes so far as to linger on a photo of Sessions with Rep. John Lewis, the legendary civil rights crusader who testified against Sessions at his confirmation hearings earlier this month and who was recently attacked by Trump as being “all talk” and “no action.”

The main fundraiser for the 45Committee is billionaire Chicago Cubs owner Todd Ricketts, whom Trump has nominated to be Deputy Commerce Secretary.