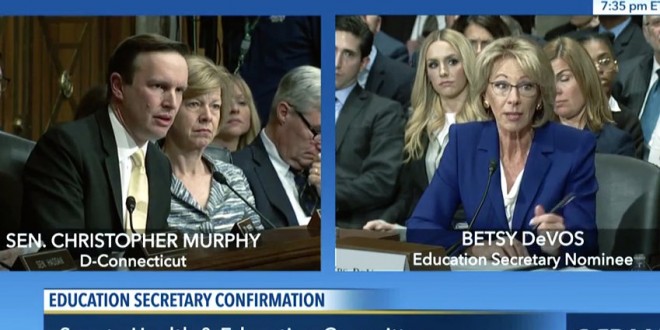 Donald Trump’s nominee for education secretary said during her Senate confirmation hearing on Tuesday that local authorities should decide whether guns should be barred from American schools — citing the case of a school in Wyoming where a special fence protects students from bears.

Connecticut Sen. Chris Murphy asked Betsy DeVos to explain whether she thought guns belonged “in or around schools.” DeVos would only say that it wasn’t a matter for the federal government to decide, arguing that some schools — like those in Wyoming — need weapons “to protect from potential grizzlies [bears].”

It’s no surprise that Murphy was the Democrat to raise the question. The Senator has been one of the most vocal Senators about strengthening gun control laws since a shooting at the Sandy Hook Elementary School in 2012 killed 20 children.

Wow: Betsy DeVos tells Chris Murphy, ex-Newtown rep, that guns in schools may be necessary to protect against bears https://t.co/5b9ZS7Rm8g

DeVos responds to @ChrisMurphyCT with support for Trump plan to get rid of gun free zones; cites grizzly bears as reason for guns in schools pic.twitter.com/EPcocq8an4

Tonight #BetsyDeVos would not oppose putting guns in our schools. I was shaken to the core by her answer. So should every American parent.