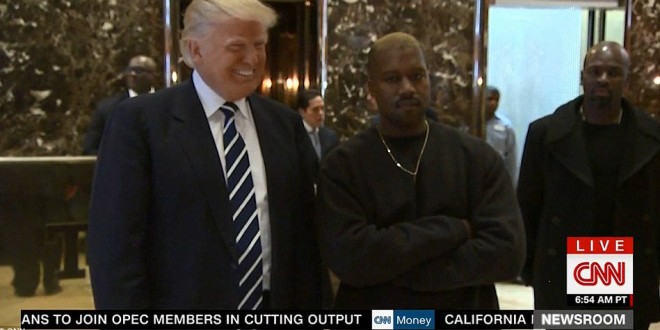 Well, this is… weird. On Tuesday morning, Kanye West showed up at Trump Tower to meet with the president-elect. The rapper and fashion designer brought his sizable entourage, although wife Kim Kardashian did not join him. In mid-November, shortly before spending a week in a California hospital to treat what TMZ reported to be exhaustion and psychiatric issues, West famously announced at a concert that had he voted in the 2016 election, he would have voted for Donald Trump.

The two shared an odd handshake when Trump met West in the lobby. According to TMZ, West had requested the meeting, and Trump had accepted. West also announced at last year’s Video Music Awards that he planned to run for president in 2020, declaring: “It’s about ideas, bro. New ideas. People with ideas. People who believe in truth. And yes, as you probably could have guessed by this moment, I have decided in 2020 to run for president.”