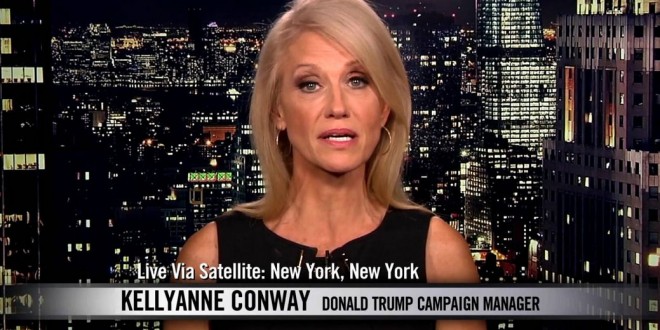 World Net Daily has named relentless liar Kellyanne Conway their “Woman Of The Year.” They write:

Slowly, painfully, the mainstream media is learning Donald J. Trump knew what he was doing all along. In the face of all but unanimous hatred from the press and overwhelming opposition from both political parties, Trump managed to conquer both the GOP from within and take the presidency in what has to be regarded as the biggest electoral upset in history.

But he didn’t do it alone. Kellyanne Conway played what Trump himself called a “crucial role” in his victory by plugging the gaps in Trump’s coalition. With her media savvy and skill as a surrogate, she helped him overcome his weaknesses with women voters. She provided the data and the ground game which brought Trump victory in states Republicans haven’t won for decades. Her tireless advocacy in the face of withering criticism showed her to be a stalwart and loyal fighter possessed of the zeal of a convert.

And Conway did seemingly what no one else could, harnessing Trump’s populist, unscripted approach behind a precisely tailored message. The result was a winning coalition few in the media thought was possible – and the most powerful political partnership America has seen in a generation.

Conway recently accepted a job as counselor to the president and will be part of the “senior staff” in the White House. President-elect Trump and Kellyanne Conway will continue to subvert the establishment press, dominate the media narrative at will, and combine populism with a professionalism in a way American politics has never witnessed before.

Together, they have already changed American politics forever. Together, they are WND’s Duo of the Year for 2016. And now, together, we will see if they can keep their promises, and Make America Great Again.

Previous Quincy Jones: No, I’m Not Attending Trump’s New Year’s Eve Party And I Don’t Know Why They Said That
Next Washington Post Editorial Board Voices “Darker Suspicions” About Trump’s Bromance With Putin