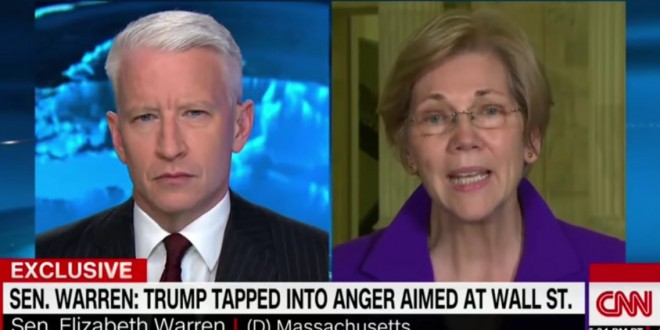 Democratic Sen. Elizabeth Warren, who’s been an outspoken critic of President-elect Donald Trump, slammed him for saying he’s “for the American people” before he selected Steven Mnuchin, a former Goldman Sachs banker, to be treasury secretary in his administration. “He promised that he was going to run this government for the American people and not for Wall Street. And what he’s just done is he’s just put a Wall Streeter in charge of the Treasury,” she told CNN’s Anderson Cooper on “Anderson Cooper 360.”

The Massachusetts senator said Mnuchin took advantage of the 2008 recession for his own benefit after he “bought a bank that made its fortune by squeezing people hard on foreclosure.” “That’s the person who’s going to be the chief economic officer of the United States,” she said. “I mean, Donald Trump is the one who said one thing during the campaign and now has reversed that by 180 degrees with what he is doing.”

Previous Retired Gen. David Petraeus Would Have To Notify His Probation Officer To Travel As Secretary Of State
Next FDA Approves Final Ecstasy Trial For PTSD