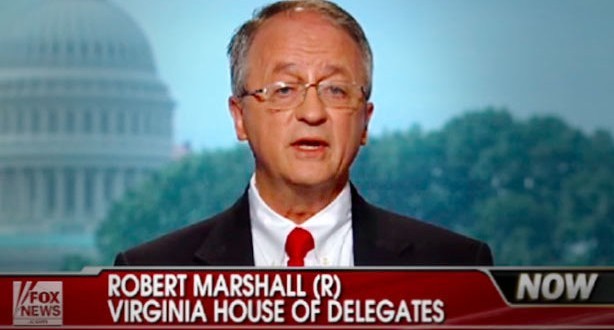 We haven’t heard from this loony tune nutbag in a while. The Associated Press reports:

A Virginia lawmaker is asking the state legislature to declare pornography a public health hazard — a move he hopes will pave the way for limits of some sort. Del. Robert Marshall, R—Prince William, has proposed a resolution stating that pornography leads to many social problems and that the General Assembly, which convenes its annual session on Jan. 11, needs to do something about it. Just what lawmakers should do is unspecified.

The measure does not call for any sort of ban, only a broad recognition of “the need for education, prevention, research, and policy change at the community and societal level in order to address the pornography epidemic that is harming the people of the Commonwealth and the nation.” He compared the value of the declaration to the one U.S. Surgeon General Luther L. Terry made in 1964, with the first official report to link cigarettes to disease.

“We’ve got to say, ‘This is a problem,'” Marshall said in an interview Thursday. “Before smoking was identified as a problem, at least the recognition that it led to certain pathologies was a starting point to put restrictions on it. . . . If you recognize it as a problem, then you’re going to try to find ways to solve it within the framework of the statutes we can pass and the institutions we have.”

PREVIOUSLY ON JMG: In December 2015, Marshall introduced a bill to override federal LGBT protections. In November 2014, Marshall badly lost his bid for the US House despite a glowing endorsement from Phyllis Schlafly. In June 2014, Marshall claimed that all charities will lose their tax exempt status following the legalization of same-sex marriage. In February 2014, Marshall filed an amendment that would grant Virginia state legislators the right to claiming standing in marriage lawsuits. In September 2013, Marshall petitioned the US Supreme Court to overturn Virginia’s legalization of sodomy. In May 2012, Marshall attempted to block the appointment of an openly gay state judge because the nominee has “an illegal husband.” In 2011, Marshall claimed it is a felony for a state office to fly the rainbow flag. Marshall has also called on Virginia to issue its own currency, and has claimed that God punishes women who have abortions by giving them deformed children. After the DADT repeal bill passed, Marshall tried to have gays banned from the Virginia National Guard.

Previous MAINE: Anti-Gay Right Wing Columnist Dies After Handgun Goes Off While Showing It To Teenage Boy
Next Even The Literal Nazis Hate Milo’s Book Deal