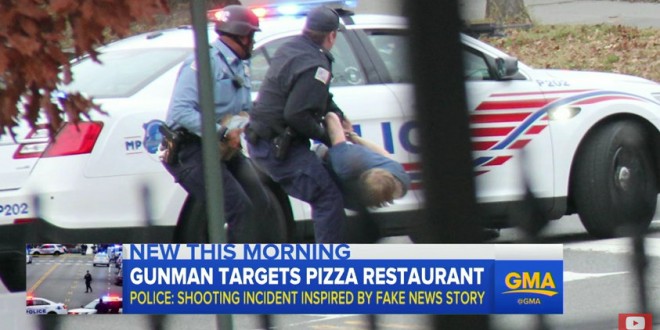 The New York Times has interviewed the nutjob that fired an assault rifle inside a DC pizza shop because he needed to “investigate” a fake news story promulgated by extremist pro-Trump sites. The guy is exactly as you’d suspect. From their article:

Mr. Welch, the father of two daughters, said he woke up Sunday morning and told his family he had some things to do. He left “Smallsbury,” a nickname for his hometown, for the 350-mile drive to Washington with the intention of giving the restaurant a “closer look” and then returning home. He wanted to “shine some light on it.” As he made his way to Washington, he felt his “heart breaking over the thought of innocent people suffering.”

What did he think when he discovered there were no children at the pizzeria? “The intel on this wasn’t 100 percent,” he said. However, he refused to dismiss outright the claims in the online articles, conceding only that there were no children “inside that dwelling.” He also said that child slavery was a worldwide phenomenon.

He has listened to Alex Jones, whose radio show traffics in conspiracy theories and who once said that Mrs. Clinton “has personally murdered and chopped up” children. “He’s a bit eccentric,” Mr. Welch said. “He touches on some issues that are viable but goes off the deep end on some things.” Mr. Welch likes to read. A favorite is “Wild at Heart: Discovering the Secret of a Man’s Soul,” by John Eldredge, about masculinity in evangelical Christianity.

He said he had grown religious in the last few years. Tattooed on his back are Bible verses: “Even youths grow tired and weary, and young men stumble and fall; but those who hope in the Lord will renew their strength. They will soar on wings like eagles; they will run and not grow weary, they will walk and not be faint.”