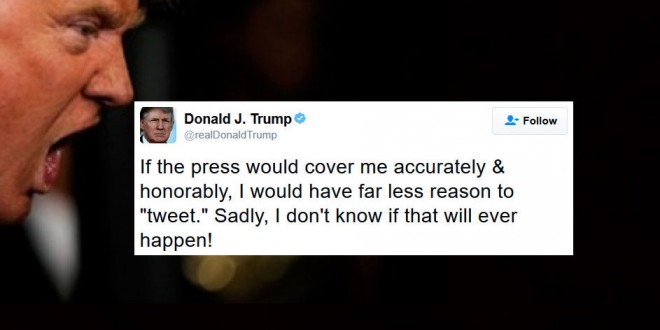 Trump: I Wouldn’t Have To Tweet So Many Batshit Crazy Lies If The Dishonest Media Didn’t Force Me Into It

In his 34,100th-plus tweet, President-elect Donald Trump on Monday suggested he would have reason to curtail his prolific Twitter use if the media covered him “accurately & honorably.”

Since his historic election nearly a month ago, Trump — who joined Twitter in March 2009 — has blamed the media for allegedly inciting “professional protesters,” attacked The New York Times and CNN, slammed “Saturday Night Live” and demanded an apology from the cast of “Hamilton.”

He has teased Cabinet announcements, boasted of his one-time critics’ congratulatory calls and best wishes, bragged about winning and claimed he would have still won if the election were based on popular vote from the beginning.

He highlighted a Trump University lawsuit settlement as the only negative thing about becoming president and took credit for saving 1,100 jobs at a Carrier plant in Indiana.

He also called Green Party nominee Jill Stein’s recount effort a scam, said without evidence that he actually won the popular vote (he trails by more than 2.5 million) “if you deduct the millions of people who voted illegally” and alleged without evidence that there was “serious fraud” in Virginia, New Hampshire and California.

And he suggested flag-burners be punished, attempted to set the record straight on his unprecedented call with Taiwan’s leader, took a hard line with China, pledged to penalize companies that outsource and announced a news conference set for mid-December — his first since July 27.