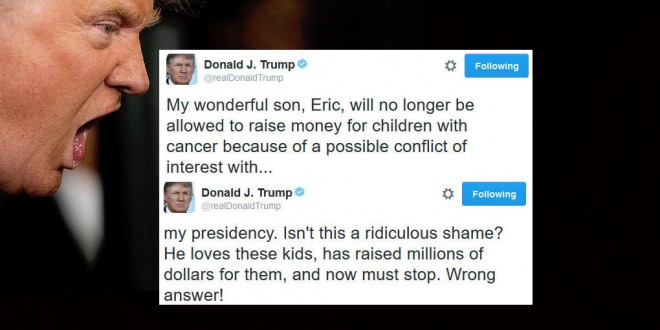 Donald Trump has claimed that concerns over potential conflicts of interest in selling access to his daughter will prevent his son from raising money to treat children with cancer. His elder daughter, Ivanka Trump, was offering to go for a coffee with the winner of the auction.

The auction was intended to benefit the Eric Trump Foundation, which raises money for terminally ill children at the St Jude Research Hospital. Bidding reached around $70,000, but the date was removed from the internet. Eric Trump told the Washington Post on Wednesday that “no new money” would be coming in to his foundation’s bank account.

He told the newspaper he could step away from the foundation, which he said has raised $15 million for children, and allow it to continue without him. A hunting trip with him or his brother, Donald Trump Jr, worth $500,000, and a photo op for up to 16 people alongside the president-elect for $1 million, were also scrapped.

One of the highest bidders was Russell Ybarra, the owner of chain restaurant Tex-Mex, who wanted her father to repeal his strict proposals on immigration as he relied on foreign workers.

Mr Trump has delayed a meeting until January to announce how he plans to deal with conflicts of interest between White House matters and his real estate and business empire.