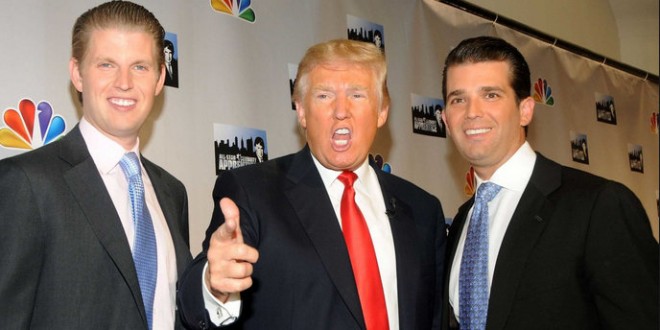 Trump Spawn Sell Inauguration Access To Daddy For Up To $1 Million, Money Goes To Unnamed “Charities”

Uday and Qusay have yet another grifting racket. Via Mediaite:

Donald Trump‘s adult sons are apparently behind a new nonprofit organization that’s offering access to the president elect – if you’re willing to pay up. The Center for Public Integrity reports that Donald Trump Jr. and Eric Trump are board members for the Texas-based Opening Day Foundation, which will be holding an event in D.C. on the day after Trump’s inauguration ceremony.

In the meantime, Opening Day is accepting donations that will go to unnamed “conservation” charities, and big donors will be rewarded with some high-value prizes.

According to a brochure published by TMZ, the organization’s biggest donors will be able to snag rewards like inauguration tickets, autographed guitars, and hunting trips with the president-elect’s children. The package offers go up to $1 million and the high-level perks include access to a “private reception and photo opportunity” with Trump.