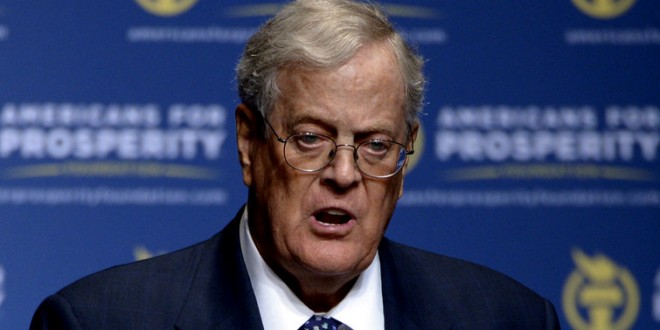 President-elect Donald Trump had a private exchange Wednesday night with billionaire industrialist David Koch, with whom he clashed during the 2016 presidential race and whose conservative policy objectives have often diverged from Trump’s agenda.

The huddle at Trump’s Mar-a-Lago club in Palm Beach, Fla., was witnessed by several people and orchestrated by Trump’s friend, Newsmax chief executive Christopher Ruddy, according to two Trump associates familiar with the conversation. They spoke on the condition of anonymity because they were not authorized to discuss it publicly.

The impromptu meeting represents the latest example of a longtime Trump adversary conferring with the president-elect at his winter retreat. Over the weekend, Mexican billionaire Carlos Slim met with Trump for dinner at Mar-a-Lago after more than a year of acrimony.

I turned down a meeting with Charles and David Koch. Much better for them to meet with the puppets of politics, they will do much better!

I wish good luck to all of the Republican candidates that traveled to California to beg for money etc. from the Koch Brothers. Puppets?

.@CharlesGKoch is looking for a new puppet after Governor Walker and Jeb Bush cratered. He now likes Rubio–next fail.

Previous Kellyanne Conway Named Counselor To The President
Next NCAA And NBA: Our North Carolina Boycott Is Still On