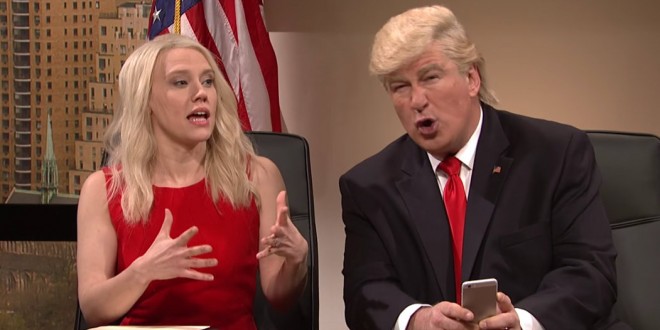 Alec Baldwin was back on “Saturday Night Live” this week to mock Donald Trump’s love of tweeting, and the real president-elect hopped on his favorite social media platform during the show to let Baldwin know he wasn’t laughing. The show’s cold open featured Baldwin’s Trump at a security briefing in which he repeatedly loses focus and turns to his phone instead. “I just retweeted the best tweet. I mean, wow, what a great, smart tweet,” Baldwin as Trump says after sharing a post by a 16-year-old California high schooler named Seth.

“He really did do this,” Kate McKinnon’s Kellyanne Conway says to camera. And, yes, in fact Trump really did. “Mr. Trump, please stop retweeting all these random, real people. You’re not getting any work done,” an adviser pleads in the sketch. “There is a reason actually that Donald tweets so much,” McKinnon’s Conway explains. “He does it to distract the media from his business conflicts and all the very scary people in his cabinet.” “Actually, that’s not why I do it,” Trump rebukes. “I do it because my brain is bad.”

Previous TRAILER: Guardians Of The Galaxy Vol. 2
Next FAREWELL FREE MARKET: Trump Vows To Impose 35% Tax On US Goods Made In Overseas Factories