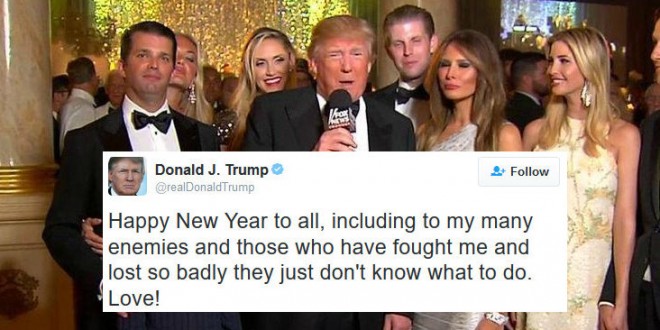 He’s finishing 2016 with holiday jeer. Donald Trump took to Twitter Saturday to wish the world a happy new year — and to excoriate his rivals a final time before the calendar turns to 2017. “Happy New Year to all, including to my many enemies and those who have fought me and lost so badly they just don’t know what to do. Love!” he wrote. The audacious tweet comes hours ahead of a New Year’s Eve celebration at his Mar-a-Lago resort. Tickets for the event — which is set to feature Sylvester Stallone, Quincy Jones and Trump’s family — were priced at more than $500, Politico reports.

I would like to wish all fathers, even the haters and losers, a very happy Fathers Day.

I would like to wish everyone, including all haters and losers (of which, sadly, there are many) a truly happy and enjoyable Memorial Day!

Previous TRAILER: 2016, The Movie
Next Quincy Jones: No, I’m Not Attending Trump’s New Year’s Eve Party And I Don’t Know Why They Said That