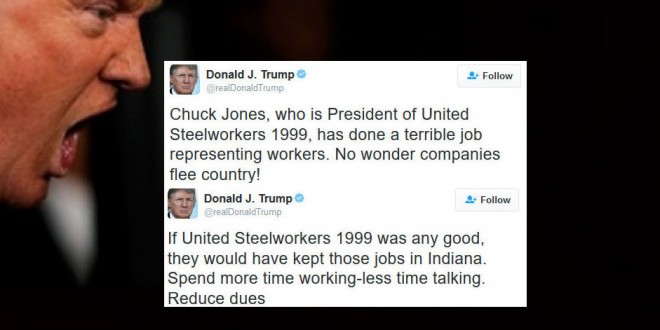 Donald Trump used Twitter late Wednesday to slam the union chief who had sharply criticized the President-elect’s claims to have saved more than 1,000 jobs at the Carrier plant in Indianapolis, and set of a war of words over who best represents American workers.

Chuck Jones, president of the United Steelworkers 1999 that represents workers at Carrier, apparently attracted Trump’s ire for a Dec. 6 Washington Post article that quoted Jones as saying the terms of deal with Carrier parent firm United Technologies were less than originally sought.

Jones also reportedly said Trump “lied his a– off” about the terms at a press conference on Dec. 1. In response, Trump used Twitter on Wednesday to call Jones ineffective. Jones had cited comments made by Trump during the presidential campaign in which the President-elect stated that he aimed to save the jobs of 1,350 workers, but instead announced on Dec. 1 that only 1,100 jobs would stay in Indiana.

Jones said that in truth, the deal saved only 730 of the production jobs and that 550 workers would still be fired. Jones told CNBC late on Wednesday that while he appreciated “everything Mr. Trump did” to save some jobs, “at the same time he misled us into believing something that is not true.”

Trump attacks an Indiana union leader and now Jones is getting death threats. This is not presidential; this is authoritarian bullying.