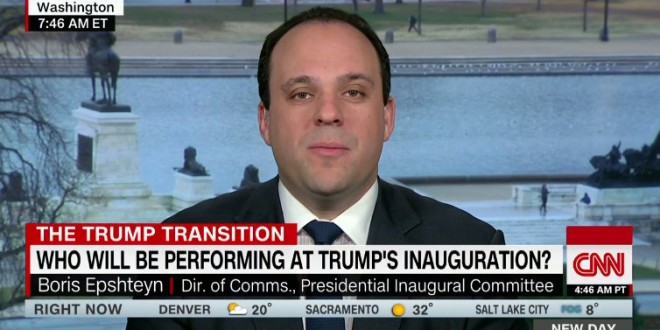 Trump Adviser Boris Epshteyn: We Won’t Have Big Stars At The Inauguration Because We Don’t Want Any

Donald Trump’s inaugural committee is having no problems finding celebrities to attend his inauguration because that’s not who the committee is looking for, Trump adviser Boris Epshteyn said Tuesday.

“Not at all,” Epshteyn, the inaugural committee communications director, told CNN. “You know, this is not Woodstock. It’s not Summer Jam. It’s not a concert. It’s not about celebrities. As Donald Trump tweeted himself, it’s about the people. That’s what we’re concentrated on.”

Indeed, the president-elect tweeted last week that “so-called ‘A’ list celebrities are all wanting tixs to the inauguration” but stressed that he wants the everyday Americans who supported his campaign to attend. “[L]ook what they did for Hillary, NOTHING,” he tweeted about such stars.

So far the only confirmed performers are the Mormon Tabernacle Choir, the Rockettes (some of them, at least), and the 2009 runner-up from America’s Got Talent.

Previous Trump’s Nazi Fans Battle Over Whether Nazi Salutes Will Be Allowed At “DeploraBall” Inauguration Celebration
Next Mike Huckabee: “Vain Obama” Insulted Hillary By Saying He Could Have Beaten Trump [VIDEO]