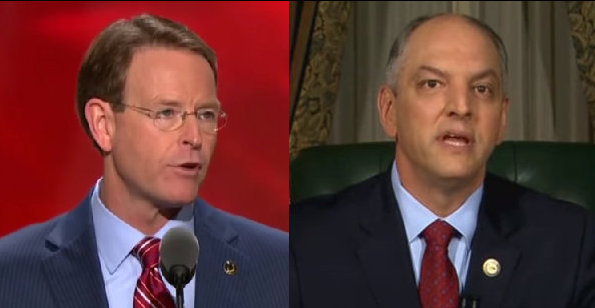 Government contracts available: Christians need not apply! That’s the unofficial motto of Louisiana Governor John Bel Edwards (D), who’s taken it upon himself to exclude people of faith from partnerships with the state. In an executive order eerily similar to Barack Obama’s, Louisiana’s liberal governor decreed that any company or organization that wants to contract with the state government has to first adopt special privileges for people who identify as LGBT — including the unsafe (and unpopular!) policies on gender-free bathrooms and showers. Essentially, he gave applicants a choice: surrender their beliefs to partner with the government or make themselves ineligible by operating according to their faith.

Fortunately for Louisiana, Attorney General Jeff Landry saw the move for what it was: an attack on the First Amendment rights of Louisiana citizens. No free country — least of all America — should punish faith-based contractors for exercising their constitutional freedoms in hiring and firing. So Landry rejected dozens of state legal contracts, prompting Governor Edwards to sue Landry in state court. A judge sided with Landry in October, stating that the governor cannot force the attorney general to approve legal contracts.

But that wasn’t the end. This week, a second case was heard — this time a lawsuit brought against Edwards by Landry on the issue of executive overreach. The case, heard Tuesday by 19th Judicial District Court Judge Todd Hernandez, was a testy one (and at nine hours, long), as the state’s top officials duked it out over the fundamental principle of religious liberty. Elizabeth Murrill, solicitor general for Landry, told the court the governor’s directive “makes law. And that is an unconstitutional act.” Landry himself has been very clear, “I will not cower to executive overreach; rather, I will continue to defend our Constitution and the will of the people.”

Governor Edwards, meanwhile, insists that the attorney general is “is on the wrong side of the law and the wrong side of history on this issue,” which is laughable, since he’s the one trying to sidestep the legislative process by issuing an executive order in the first place! Let Governor Edwards know you’re fed up with his lawlessness. Tell him it’s time for the Left to stop penalizing people of faith! No one should be required to choose between doing business with the state or violating their conscience.