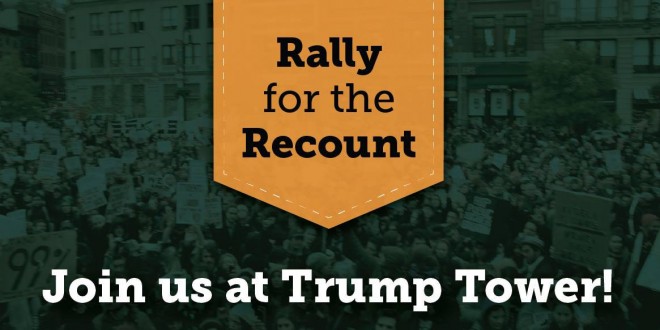 As Donald’s Trump’s margin in Pennsylvania drops significantly and his team desperately rushes to block recounts in Pennsylvania, Michigan and Wisconsin, Dr. Jill Stein will host a rally and press conference outside Trump Tower on Monday, December 5 at 10:00 a.m. ET, vowing to fight tooth and nail to verify the accuracy, security, and fairness of the vote.

At Trump Tower, Dr. Stein will be joined by grassroots supporters who have fueled her unprecedented multi-state recount campaign, which quickly raised $7 million from nearly 150,000 individual donors. Stein and supporters will call on Trump and his allies to stop putting party politics above country, and verify the vote through common-sense procedures demanded by voters.

“We won’t stand down as Donald Trump and his allies seek to frivolously obstruct the legal processes set up to ensure we have a voting system we can trust and that all votes have been counted,” said Stein.

I’ll add a live video stream to this post if one pops up.