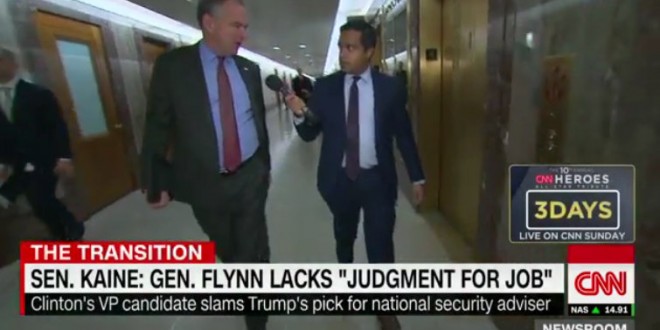 Tim Kaine Rips Michael Flynn On Fake News: He’s So Gullible He Peddles Stories Even A Child Would Ignore

Kaine, who was Hillary Clinton’s running mate this year, has kept a low profile since suffering the stunning loss to Trump last month. But Kaine told CNN Thursday that Flynn lacked the judgment to serve as Trump’s top adviser on national security issues.

“The general I’m worried about is Gen. Flynn,” Kaine said in an interview. “Gen. Flynn’s trafficking in conspiracy stories that a fourth grader would find incredible suggests either that he’s highly gullible or that he’s so consumed with malice that he loses his ability to judge what’s fact and what’s fiction.”

Kaine added, “Having a national security adviser who has demonstrated either such gullibility or such malice in charge of offering advice to the President on the critical national security issues of the day, I think, is highly highly troubling.”