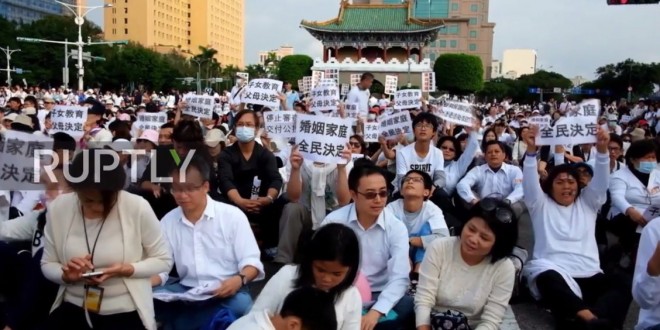 Opponents of same-sex marriage yesterday rallied tens of thousands of people along Ketagalan Boulevard, in a massive protest against proposed Civil Code amendments. Coalition for the Happiness of Our Next Generation, which organized the protest, said 80,000 people attended the demonstration, whose white-shirted crowd spilled out of Ketagalan Boulevard to encircle Jingfu Gate (景福門).

Organizers said that companion rallies in Taichung and Kaohsiung attracted an additional 90,000 participants. While a huge rally outside the Legislative Yuan last month was marked by Christian hymns and prayer, yesterday’s event had a more ecumenical bent, with protesters dancing to the children’s song Lovable Family.

Participants waved pieces of paper calling for a referendum on same-sex marriage and parental control over children’s education, after being forbidden from bringing their own banners by event organizers.

A skit called for what it called a pro-homosexual curriculum to be “driven out” of schools, with members of the crowd also throwing around two large black balls while calling for Democratic Progressive Party (DPP) Legislator Yu Mei-nu (尤美女) to “roll out” (滾出去) of Taiwan — a pun on the Mandarin expression for “scram.”

Yu has been one of the main sponsors of amendments to the Civil Code, which would legalize same-sex marriage, also serving as co-convener of the Judiciary and Organic Laws and Statutes Committee to which legislation has been referred. Leaders from a cross-section of Buddhist, Daoist, Christian and other religious groups, which have joined the anti-gay marriage National Religious Alliance, were also featured.

Way to go, Taiwan! We’re with you in spirit. https://t.co/AvXh4KSNpU