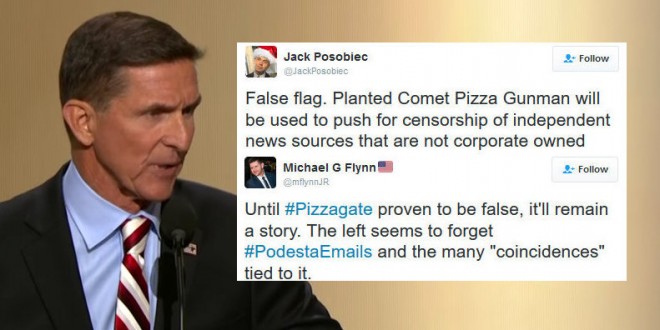 As I noted in the comments of this morning’s story about the DC pizza shop shooting, YouTube is already ablaze with conspiracy nuts who claim that the gunman was planted by the mainstream media and/or government in order to further the imaginary crackdown on right wing sites like Breitbart. And now this:

The son of retired Lt. Gen. Michael Flynn, President-elect Donald Trump’s pick for national security adviser, on Sunday appeared to spread a conspiracy theory that Hillary Clinton and her campaign chief ran a child-sex ring in a back room of a D.C. pizza shop. Michael Flynn Jr. on Sunday tweeted about the false story after an armed man entered Comet Ping Pong in Northwest D.C. and claimed to be investigating the story. The tweet linked to a post from the account of Jack Posobiec, who says he is the special projects director of a group called Citizens4Trump. He described the incident on Twitter as a “false flag.”

Posobiec is one of Twitter’s most notorious promulgators of fake news.