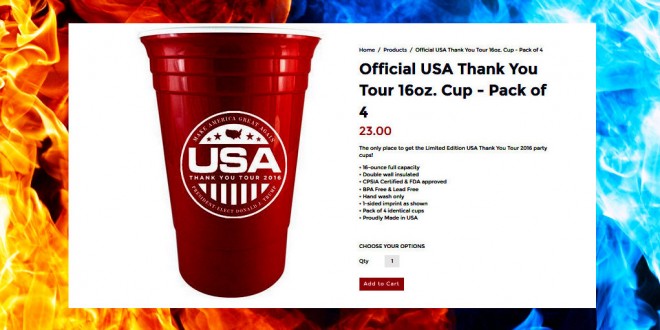 President Elect Donald Trump likes to put his name on things. He will license it out to buildings that he doesn’t own, board game manufacturers, and steak distributors for some reason, plus he has his own range of in-house merchandise stemming from his campaign. As part of his “Thank You Tour,” that last one has been updated, and one of the new items is a doozy. In the tradition of the bright red “Make America Great Again” hat, Trump has put his brand on another iconic red item: The party cup. A typically disposable item bought in bulk, Trump is charging an astounding $23.00 for a pack of four, each presumably representing one year of his presidency.

Walmart sells a 50-pack similar version of the cup (sans artwork) for $6.27 or thirteen cents per cup.