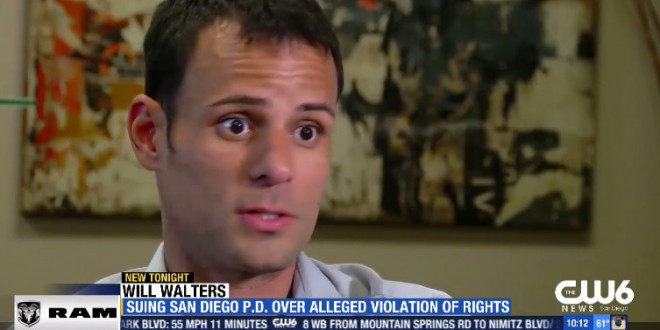 A man who unsuccessfully sued San Diego police over his public nudity arrest at a gay pride festival was found dead Wednesday night at his Hillcrest apartment in an apparent suicide, authorities said. The death of Will X. Walters comes about two weeks after a federal jury delivered the verdict in favor of police.

Walters’ attorney, Chris Morris, said Walters was shocked by the Dec. 13 verdict and immediately left the downtown San Diego federal courthouse after it was announced. Morris said he hadn’t heard from Walters since and had tried to reach him in the days that followed. Friends also tried checking on him, the lawyer said.

Walters sued San Diego police claiming they violated his civil rights when they arrested him at the 2011 San Diego Pride Parade and Festival at Balboa Park. He was wearing a custom made gladiator kilt with front and back panels that didn’t fully cover his buttocks.

He refused to cover up when asked to by police and was finally arrested for public nudity and taken to jail when he would not sign the misdemeanor citation. The case went to trial earlier this month after the 9th U.S. Circuit Court of Appeals ruled in Walters’ favor. The lower court had originally sided with the city and dismissed the suit with a summary judgment.

After the jury’s verdict earlier this month, Walters’ legal team told the press his legal bills over the years-long ordeal approached $1 million. Previous Wikileaks: Maybe Those Expelled Russian Diplomats Should Just “Hole Up” Until Trump Takes Office
Next Trump Shrugs Off Obama’s Sanctions On Russia: It’s Time To Move On To Bigger And Better Things